Rev. Dr. Jenn Parks-Snyder began her appointment as pastor for First United Methodist Church of Hershey on July 1, 2021. Previously, she was the pastor at Lightstreet United Methodist Church in the Lewisburg district for eleven years. She also served as an Assisting Elder for the Lewisburg District for two years. Prior to that she was the Associate Pastor at First Hollidaysburg UMC for three years; served as the pastor to Caledonia Charge in the Chambersburg area for three years, and Powell's Valley Charge in the Harrisburg area for four years.

Prior to entering pastoral ministry, she was a Children and Youth Caseworker for Berks County. She received her Master's of Divinity in May 2006, and her Doctorate of Ministry in Church Leadership in May 2018 from Wesley Theological Seminary in Washington, DC.

Pastor Jenn is married to Scott Snyder who works in the Mail Department at Messiah University. Together they have three children, Lucas who is studying nursing and working at The Hershey Medical Center in Housekeeping, Alex who will be a student at Dickinson College begining the fall of 2021, and Davi, a transgender female who is a junior in high school and aspiring artist. Shawn is Director of Music Ministry leading the choirs and praise teams and serving as organist. He holds undergraduate degrees from Lebanon Valley College, a Master of Music from Westminster Choir College, and the Doctor of Worship Studies at the Robert E. Webber Institute for Worship Studies. In addition to his church work Shawn is an adjunct music instructor at Messiah University in Grantham, is Artistic Director of Hershey Handbell Ensemble, is the Dean of the Harrisburg Chapter of the American Guild of Organists, and is the immediate past president of the Fellowship of United Methodists in Music and Worship Arts. Shawn and his wife Laura have four children: Peter, Sarah, Christian and Aaron and they reside in Elizabethtown.

Cassie graduated from Millersville University with a BS in Elementary Education in 2010.  She spent two years teaching in the School District of Lancaster before joining the staff at First Church in August of 2012.  She resides in Elizabethtown with her husband, Peter; son, Crosby; and daughter, Grace.  Cassie is passionate about serving and missions.  In her spare time, she enjoys reading, walking, and spending time with family and friends.

Stephen graduated from Messiah College in 2016 with a B.S. in Business Administration, concentration in Leadership, and a Minor in Youth Ministries. He began serving at First UMC Hershey in January of 2016 returning to his hometown of Hershey where he graduated from high school in 2012. Stephen has been working on a M.A. in Theology and Ministry from Fuller Seminary since Fall 2017. Stephen enjoys a good Bible study, deep conversations about faith, playing pretty much every sport there is to play, hanging out with friends, and seeing people choose to follow Jesus. 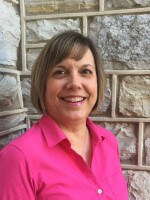 Associate in Ministry for Congregational Care

Beth received her B.S. in Biology from Penn State in 1983, then graduated with an M.D.  from Penn State’s College of Medicine in Hershey in 1987. After completing a residency in Emergency Medicine at East Carolina University’s Pitt Memorial Hospital, Beth returned to the Hershey area.  She worked in several local Emergency Departments until 2003 when she left her medical career to homeschool her two children until their high school graduation in 2016. In July of 2019, she joined the staff to serve as the Associate in Ministry for Congregational Care.  Beth is married to Ron Louder. They have two children: Robert and Lidiya. Beth has been an active member of First UMC since 1992, serving in the Sanctuary choir and other ministries.  She is passionate about missions and has led numerous mission teams to Ukraine.